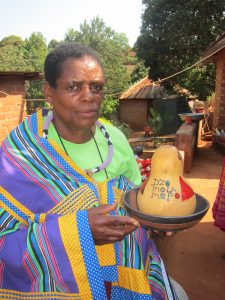 She is the Dzomo la Mupo sacred sites co-coordinator.Members of DLM said she is the one who can lead this role when she was elected in DLM general meeting.The members said that  the programme of Zwifho require an elder Makhadzi who is from Zwifho clan and who is able to write and talk about Zwifho knowledge.

Zwifho are Sacred Natural Sites of natural forests and they are found in Nature inside indigenous forests.Zwifho are also found in lakes(Dzivha) or natural ponds(mativha), natural waterfalls(mahovhohovho and caves(mabako) and all these are sorounded by indigenous forests. Zwifho were created by Ri sa mu di or Nwali (Creator or God) since Tsiko (Creation of the Universe). Zwifho are not human made, or demarcated by human beings like Zwiendeulu (royal graveyards) or game parks. Zwifho means ‘‘to give and be given’’. Zwifho is the root of our life and well-being. There is no written record which can say when those places become Zwifho, and who chose the people or the Clan to be the Custodians of each Zwifho. This has been respected and passed on by generations of our ancestors through our oral tradition, which is older than the written tradition.The zwifho has been respected as such by everyone in our communities. Zwifho is a place where Vhadzimu (ancestors’ spirits) It is where thevhula and u phasa (ancestral ceremonies) are performed in each zwifho by the custodian clan chosen by Ri sa mu di or Nwali (Creator or God). When we do thevhula and u phasa (ancestral ceremonies), we ask for shothodzo u ri shango li lale (harmony and well-being, peace and health for all). Thevhula and u phasa are the same with doing prayer, this is where in zwifho humble ourselves to request shothodzo(harmony).

In Dzomo la Mupo, the knowledge of the protection of sacred natural sites, and indigenous forests is held in the memory of the elders, and in particular the women  ( vhomakhadzi). The elders are experienced in the governance of their ecosystem for maintaining the, ancestral spiritual order, territorial order and the balance of the seasonal cycles which regulate the climate. This knowledge is also trafered to the younger generations orally.Vho-Makhadzi said, I write Luvenda language , I will only need a translator when we use English but the work is not about education qualification, Dzomo la Mupo work needs elders knowledge, not school education certificates.The school people learn from us the elders and then write our knowledge” Vho Makhadzi Vho-Joyce has been there in the beginning of dialogues with elders during the times of the late Chief of Tshidzivhe. Many dialogues which she attended , she played a huge role for the foundation of Dzomo la Mupo. She is now able to lead the ecological mapping processes.Her knwledge on Zwifho is outstanding as she represent DLM in government meetings explaining the importance of zwifho. Watch her and listen to her in this film.(you can link a sacred site voice film)

This site uses Akismet to reduce spam. Learn how your comment data is processed.

Wild Veg of the week – Dzaluma

Faces of Africa – The Defender of the Sacred Sites