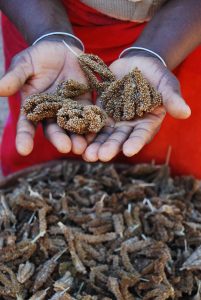 Finger Millet (‘Mufhoho’ in Tshivenda) is sacred to the people of Venda and it is used for rituals (mpambo) as well as for Vhuswa and the traditional drink Mabundu. Mufhoho, native to Africa, was the staple crop in Southern Africa before maize was introduced, but today it is being forgotten in favour of lower maintenance plants. Dzomo la Mupo work with communities to revive this important crop, in order to conserve biodiversity and food security.

There are a great many benefits to growing finger millet which have been overlooked, perhaps for the sake of an ‘easy life’. Out of all the cereals in the world, the finger millet is one of the most nutritious and tasty, and the plant is productive, thriving in a variety of environments and conditions. It is very rich in minerals, retaining 5000% more calcium than maize, and 350% more iron. The main protein fraction has high biological value with components crucial to human health and growth, something deficient in most other cereals. Furthermore the seeds are resistant to insects and can be stored for up to 10 years without rotting or losing any value (Lost crops of Africa, NRC 1996), and it is not affected by cross-pollination or any serious diseases.

In a globalised world where biodiversity is being destroyed in favour of monocultures of maize, soy and canola, and with genetically modified foods threatening our health and our rightful claim to culture and food sovereignty; finger millet is a beacon of hope.
Dzomo la Mupo are encouraging the revival of ‘Mufhoho’. We hold workshops on seed, highlighting the benefits and the importance of this valuable crop.